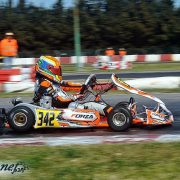 Jonny was stunningly quick at Sarno and deserved a much better result than the record book suggests. He emerged from Friday’s Timed Qualifying session as the 4th fastest in his group, despite being slowed by traffic on the last lap.

Friday’s opening heat produced a 5th place finish and he seemed to be a tenth or two down on pace. One or two minor alterations produced the desired improvement and, next time out, he claimed a fine 2nd place behind Italy’s Andrea Rosso, setting the fastest lap of this race. Heat 3 on Saturday ended in a very comfortable win as he finished some 70 yards ahead of Rosso, who had been the pre-race favourite. Once again, Jonny was accredited with the fastest lap time.

Heat 4 turned out to be another good race for him, although he had to fight through a bit of traffic before taking 2nd place behind fellow Brit, Chris Lulham. At one point he’d been almost 40 yards behind the leader but managed to close this gap dramatically. The electronic timing system showed that he’d set another fastest lap in this race. These results meant that he’d be setting off from pole position in the Pre-Final. To qualify for the main event he needed to finish in the top 17.

Everything appeared to be going to plan on Sunday morning when Jonny emerged from free practice having set the fastest time of any driver all weekend. Looking at the time sheets, it seemed as though Sunday afternoon’s main final might result in a contest between two British stars, Jonny and Chris Lulham. Unfortunately, fate had another ending in mind.

Jonny’s weekend came to an untimely end after just two laps of the Pre-Final had been completed. Under yellow flags he was struck from behind by another driver. Unable to restart his kart, Jonny’s race was ended almost before it had begun.

“I’ve never seen Jonny go quite so quickly during any of his previous races and it was disappointing that his weekend should end so abruptly,” said Justin afterwards. “However, it’s given us some encouragement for the opening European Championship Round at this circuit in a fortnight’s time.”