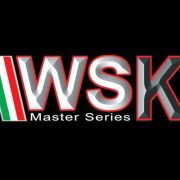 Jonny travelled to Apulia in Southern Italy to race on the famous La Conca International circuit. Despite recording disappointing lap times throughout Thursday’s free practice sessions, he eventually conquered this demanding track and came close to emerging as an outright winner.

Thursday certainly wasn’t a good day for him and he struggled throughout every practice session, recording times that were more than a second per lap slower than the quicker drivers. Even on Friday morning he was placed 19th in his group and 40th overall. For the Timed Qualifying session, however, all drivers reverted to controlled tyres and he probably surprised even himself by emerging 3rd overall.

He claimed 1st, 2nd and 5th positions from his three heats, placing him on pole for Sunday’s Pre- Final. The Dutch driver, Kas Haverkort took an early lead in this one, but Jonny tracked him very closely, missing out on 1st place by half a kart’s length at the end. The highly fancied Italian star, Mattia Michelotto finished 70 yards behind in 3rd spot with Britain’s Zak O’Sullivan 4th. Harry Thompson won the other Pre-Final ahead of Italian Leonardo Marseglia and Paul Aton from Estonia.

Jonny started the Grand Final off grid 4. However, he had an important edge over all of the front runners in this race. Having conserved his tyres throughout the qualifying races, he could start this final on a brand new set of rubber. Unfortunately, this advantage was soon to be wiped out.

After the lights turned green, Thompson and Haverkort went into Turn 1 alongside each other. That caused the Dutch driver to spin. Jonny narrowly avoided hitting him, but he lost vital places as a result of his evasive action.. O’Sullivan, who had started immediately behind Jonny, wasn’t quite so fortunate and ran into the back of Haverkort, ending his race completely. The race had just reached half distance when Jonny retired with a broken chain.

“Initially, I thought the engine had seized,” said Justin afterwards. “Snapping a chain was bad luck, but at least Jonny’s spirit remained unbroken. I wasn’t too disappointed by the result. We were so far off the pace on Thursday that I expected to be going home without him having made the main final. Qualifying in 1st position from his heats was unbelievable and it’s given us a boost for future events in Europe.”

Stunning at Sarno
Scroll to top