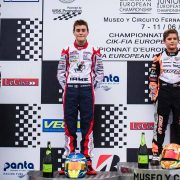 Jonny had to overcome numerous problems in Spain, but he ended his weekend with a stunning performance that, under normal circumstances, would have placed him well clear in the European Championship table.

His first piece of bad luck came about once the order for Timed Qualifying was announced. Once again, Jonny was drawn in the first group. Drivers in this group are placed at a considerable disadvantage because they come out onto the circuit immediately after KZ1 karts that always lay down lots of rubber. Invariably, the next ones out are quicker and Group 3 is faster still. Despite topping his group by over 0.2 seconds ahead of Genis Civico, Jonny found himself down in 8th spot on the overall qualifying list.

Things seemed to be going well enough for him in his opening Heat when he finished 2nd behind Jack Doohan. Fellow Brits Zak O’Sullivan and Harry Thompson took the next two places. He enjoyed a comfortable win over Ilya Morozov in Heat 2 but was penalised next time out after colliding with another driver. That penalty dropped him from 5th down to 13th position. Unfortunately video evidence showing him to be the innocent party was ignored by the officials. Heat 4 proved to be even more disastrous. After taking the lead in this one, he was struck from behind and launched into the air. Jonny wasn’t able to complete this race and knew that he’d be starting the Final off grid 17.

Realistically, Jonny’s expectations amounted to nothing more than a top ten finish, but he showed lightning pace in this race to climb very rapidly through the field. By half distance he was up to 5th, just 20 yards or so behind the leaders Harry Thompson and Chris Lulham. With 5 laps still remaining, he hit the front and accelerated away to finish comfortably ahead of the chasing pack led by Mattia Michelotto. Civico was in 3rd spot, followed by Lulham and Thompson.

The National Anthem was played before it was announced that Jonny had incurred a 10 second penalty under the displaced front bumper ruling. It was a rather cruel stroke of luck that cost him 13 places. Instead of leaving Alonso with a substantial championship lead, he took just two points from the entire meeting and now lies 2nd in the table.