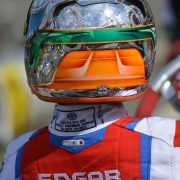 Jonny was awesome at Ampfing after placing a late entry into the German Kart championships (Deutsche Kart Meisterschaft). Although most of his rivals had been practicing at the circuit since Tuesday, he didn’t arrive until Friday morning. However, he lost no time in getting amongst the top four pacesetters throughout that day.

Despite its name, the DKM attracts drivers from all over Europe and less than half of the competitors in Jonny’s class were actually of German origin. Included in a star studded entry list were Italians Luigi Coluccio, Leonardo Marseglia, Etienne Linty and Mattia Michelotto, together with Kas Haverkort (Holland) and Hadrien David (France). Hugo Sasse, Niels Troger, Marius Zug and Paul Enders were amongst the fancied German contenders.

Jonny emerged from timed qualifying as the 2nd fastest driver behind Sasse. He won his opening Heat and then took 2nd place in the other one. Those results guaranteed him a front row slot for the first final. He led this race for all of the 19 laps despite being followed very closely by Sasse. Hadrien David finished 3rd.

From pole position in Final 2, he opened up a gap of 20 yards or so and never looked like relinquishing his lead. On this occasion it was David who took 2nd spot followed by Coluccio and Sasse.

With no previous knowledge of the Ampfing circuit and only limited time available to learn its nuances, Jonny had pulled off a remarkable double victory that confirms his status as one of Europe’s leading contenders. Sadly, his team boss at Forza wasn’t around to see it. Jamie Croxford had to take an early flifgt back home on Sunday morning following the death of his grandfather.

Speedy in Spain
Scroll to top