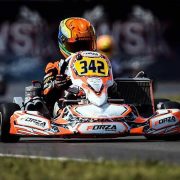 Jonny’s European championship hopes took a big leap forward after he came away from the Le Mans circuit having achieved a very satisfying result. With two rounds now remaining, he has moved 12 points clear of Germany’s O’Neill Muth, with Harry Thompson in 3rd place a further 4 points behind.

Friday’s Timed Qualifying sessions were mainly held on a damp, but drying circuit. Jonny was drawn in Group 3 and he came out just as a heavy shower left the track awash once again. He easily topped the group, more than 0.6 seconds ahead of his nearest rivals. However, the other two groups were obviously much quicker as they had gone out in more favourable conditions.

He finished 4th in his opening heat, following this with two 2nd place finishes on Saturday. Heat 4 early on Sunday morning provided him with 3rd spot. These results were good enough to earn him a front row starting slot for the afternoon’s final, opposite pole sitter Hadrien David from France. Almost as importantly, he’d picked up 9 bonus points along the way.

Despite getting off to a quick start, Jonny found himself forced out of position on the opening lap and dropped down to 6th place, more than 30 yards behind the race leader. However, he quickly made up lost ground and joined the leading trio after 6 laps. Muth took over 1st spot just before half distance and then Jonny hit the front several laps later. Muth got his wheels ahead shortly afterwards and David followed through.

With seven laps still remaining, there was plenty of time for Jonny to have a crack at regaining the lead. Unfortunately, a collision further down the field brought out Battenberg flags. To all intents and purposes, the race ended at that point, but 3rd position was still a good result for him.

You can easily move from hero to zero in these rounds and it’s important to stay out of trouble throughout the weekend. Jonny had discovered this to his cost during the previous event in Spain. Despite coming home in 1st place, after setting off from grid 17, he incurred a front bumper penalty that dropped him down to 14th, thus earning just 2 points from the entire meeting. In France, 34 out of 63 runners qualified for the final. Of these, more than 25% incurred time penalties. Across the entire weekend, 49 penalties were imposed, leaving drivers with a 78% chance of being hit with one.

“We know how easy it is for things to go badly wrong and Jonny’s 12 points championship lead could quickly disappear,” Justin conceded. “However, we’d much rather be sitting at the top right now than somewhere near the bottom.”

Sweet in Sweden
Scroll to top