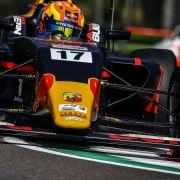 No stopping the Juniors racing and winning into a new season

Not a single month without race action for the Red Bull Junior team as Jack Doohan started the new F3 Asian season with a win back in December 2019. He continued by winning again in January and by the time the Australian turned 17 on January 20th, fellow Juniors Liam Lawson and Yuki Tsunoda had already made winning starts to their Toyota Racing Series campaign in New Zealand.

17-year-old New Zealander Lawson is the reigning champion and Tsunoda was making his debut, winning one race in the opening round to Lawson’s two. Lawson will meet Doohan back in Europe as both contest the FIA F3 championship. Tsunoda is part of the Honda Formula Dream Project, the joint venture with Red Bull, and moves up this year to F2 with Carlin Motorsport.

There are 3 Juniors in F3 with Dennis Hauger, the 16-year-old Norwegian, joining Lawson in the Hitech Grand Prix team. Doohan is part of the HWA Racelab F3 effort.

After just a few months off following his second place in Macau in November, Jüri Vips the 19-year-old Estonian, will be in Japan for Super Formula this season driving for Team Mugen.

Photographs are available at:
www.redbullcontentpool.com

Jonny Edgar… On the right track
Scroll to top