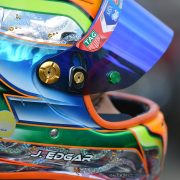 Jonny will be taking part in the 2016 Rotax World Finals at Sarno, beginning on October 15th and ending a week later. The Circuito Internazionale di Napoli has been ranked amongst the world’s finest and is regularly used by today’s F1 drivers for testing purposes. It will host this year’s event that has attracted 380 drivers from 50 different nations. The proceedings are being broadcast live on TV starting from Wednesday, October 19th.

Jonny qualified for this prestigious event by taking 2nd place in the S1 national Championships for Rotax Mini-max behind Jenson Butterfield. The final S1 Round took place at PF on September 25th. The weekend didn’t get off to a particularly good start for him when he was caught in traffic during Timed Qualifying. It meant that he’d be starting off from grid 12 in both his heats.

He came through the pack very quickly in Heat 1 to eventually finish 3rd behind Lorcan Hanafin and Tom Canning. In the next one he almost grabbed an unlikely victory, losing out to Butterfield by a matter of inches. With good points amassed from his heats, he just needed a couple of reasonable results in the two finals to attain the championship runner’s up place.

It seemed as though the fates were conspiring against him in Final 1 when he collided with another driver. However, he recovered to eventually finish 6th in this race. All Jonny then needed in Final 2 was to finish closely behind Tom Canning.

Butterfield won the race ahead of Hanafin. Canning finished 5th behind Klaas Kooiker and Ben Fayers, but Jonny claimed that all important 6th position. “Jenson had already won the title before we came to PF, so 2nd place was all Jonny could hope for,” Justin remarked. “If anyone had offered us that in our first season of Rotax, we’d have been delighted. We are now looking forward to Sarno and hoping for a good result there.”

No luck in Naples
Scroll to top