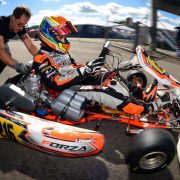 Jonny further enhanced his international credentials with a powerful performance at Garda, despite track conditions in Sunday’s main final that mitigated against smaller drivers.

School commitments prevented him from taking advantage of the circuit’s practice facilities earlier in the week. It meant that he spent most of Thursday’s free practice sessions running in motors. Nevertheless, he still managed to post some quick times that offered encouragement for the weekend activities ahead.

He was 3rd in Friday’s Timed Qualifying but then suffered a setback in his opening Heat. Entering Turn 1, Jonny was hit by some karts behind him and he ran off the circuit. After rejoining this race he came back up to 8th spot. It was followed later that afternoon by a 5th place finish.

With just one Heat scheduled for Saturday, Jonny had a long wait before this race went out. He followed Denmark’s Nicklas Nielsen home in this one to take 2nd spot. That earned him a grid 4 set off for Sunday morning’s “Super Heat”. This race was run on a wet circuit and Hannes Janker from Germany immediately opened up a big gap. Jonny went into 2nd spot almost straightaway, but he had sustained a dropped front bumper at the start. Pulling out a big gap over the chasing pack was his main priority in this one. Despite the mandatory 10 seconds penalty, he only dropped one place, down to 3rd.

When the points were added up, Jonny was lying in 7th position from 70 entrants. Only 34 competitors could start the main final. As they lined up for this race, the circuit was beginning to dry quite considerably and everyone opted for slicks. Jonny made a good start and soon climbed up to 3rd position. With a number of drivers bunched up closely behind, however, he soon got involved in a dogfight that cost him valuable time. He finally finished this race in 8th position, which was still a good result for him.

“Jonny never put a foot wrong all weekend and I was very happy with his performance,” Justin declared. “I knew that a drying track with everyone on slick tyres was the worst possible combination for him, because taller drivers will always generate more down-force in such conditions. However, we are very encouraged by this result and look forward to some interesting times ahead.”