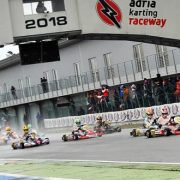 58 seniors turned out for this meeting and competition was intense throughout the entire weekend. Jonny looked quick during Thursday’s free practice sessions and he continued this run of form on Friday. On a rapidly drying circuit, he narrowly lost out to Pedro Hiltbrand in Timed Qualifying, but 2nd place guaranteed him front row grids for his three Heats.

His opening race on Friday afternoon resulted in a disappointing non finish that cost him valuable points. It had all started well after he nipped past Callum Bradshaw to take an early lead. This actually worked to his disadvantage as he was the first driver to hit a pool of water caused by a back-marker’s hosepipe coming loose on the previous lap. There were no warning flags put out and, as he was travelling at speed on slick tyres, Jonny had no chance of taking evasive action. Five others were similarly affected, while Bradshaw lost over 150 yards as a result. The adrenaline was running high at this point.

The track was wet throughout Saturday, Jonny couldn’t afford another mishap and he finished in a steady 2nd place behind Vincent Fraisse. This was followed by another 2nd place finish behind Alenjo Vidales in the next one. These results were good enough to place him 10th overall and meant that he’d be starting Sunday’s Pre-Final off grid 5.

The circuit remained dry on Sunday allowing for some quick times to be posted. Jonny looked a little short of pace throughout the Pre-Final, but he fought gamely to eventually take 4th spot. Starting the main event off grid 8, he climbed up into 6th position, but then came under relentless pressure from Lorenzo Ferrari and Roman Stanek, who were able to pass him before half distance. 8th place ultimately was the best he could reasonably expect,

It had been a hard weekend under variable conditions. A top ten finish in an international field of this quality is no mean achievement and for Jonny there was added consolation in being the highest placed British driver. His next outing will be at Garda for the Winter Cup that gets underway on Thursday, February 15th.

Jonny wishes to thank Red Bull Racing, Forza Racing, GFR Engines and FreeM UK for all the support they are giving him.