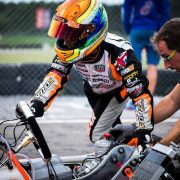 Jonny had his first competitive outing as a senior driver when he flew over to Adria in Northern Italy for the WSK Champions Cup. Just about all of the world’s top senior karters were taking part in this prestigious event.

Despite spending most of Thursday’s free practice sessions running in motors, he still got in some rapid laps and topped the timing sheets on Friday morning. In the timed qualifying session later that afternoon he was 6th overall. It meant that he would start his opening heat off grid 4. Zane Maloney took an early lead in this one and soon pulled out a big gap. Once Jonny moved up into 2nd spot, however, he clawed back Zane’s advantage and passed him with a couple of laps remaining.

Saturday’s racing began badly for him. After sweeping into the lead on lap 1, his motor seized, resulting in a costly DNF. It was important for him to score finishing points in the last heat and he coasted to a comfortable 2nd place behind Denmark’s Nicklas Nielsen. That result was good enough to place him 10th in the overall standings.

He began Sunday’s semi final off grid 5 and moved up into 2nd position after 4 laps. By that stage, though, Roman Stanek of Czechoslovakia was almost 40 metres ahead. Jonny soon caught up and went into 1st place with half of this race remaining. Nielsen had already won the first semi final and claimed pole position for the main event, by setting a slightly quicker time.

Jonny had to settle for 2nd place behind Nielsen as the Grand Final got underway. After reaching quarter distance, however, he spotted an opportunity and went into 1st place. The Dane fought back immediately and pulled alongside him. It left Jonny struggling off line as the chasing pack swept past. He lost over 30 metres in one lap and the deficit grew even greater as he fought to make up places. 5th position at the end wasn’t a bad result for him, but it could have been so much better.

He will return to Adria later this week for Round 1 of the WSK Super Master Series that gets underway on Thursday. Further rounds will take place at Garda, La Conca and Sarno.

©
Vroom at the top

Adrenaline at Adria
Scroll to top