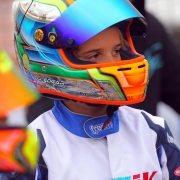 Jonny has signed for the internationally renowned Forza Racing team, with whom he will contest the 2017 Junior European and World Championships. He’ll also be competing under Forza’s banner in the British Championships for OKJ.

Forza’s boss Jamie Croxford had a distinguished karting career before deciding to run his own team. Ten years ago he was competing in Paul Fletcher’s outfit alongside Mark Litchfield. That led to a contract with the official Birel factory team in 2007.

Despite their enviable international reputation, Forza Racing hasn’t featured prominently on the British scene in recent years. Jamie Croxford sees Jonny’s signing as an opportunity for the team now to contest domestic as well as international championships.

“We are very excited to announce the arrival of the young British ace, Jonny Edgar, to our Forza racing driver line-up in 2017,” he said. “We shall be competing in our usual schedule of World/European/WSK Championship events but also returning to our roots by competing in the MSA British Championships.”

Justin explained that Jonny has been considering offers from a number of top teams, including several factory based outfits, but they have opted for Forza as a known quantity. “We were impressed by their professional approach and an obvious desire to win top level events,” he pointed out.

©
No luck in Naples

Awesome at Adria
Scroll to top