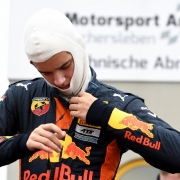 Jonny Edgar is ready to fight at the front this weekend in Italian F4 as the series is in Imola for the second time. The Red Bull Junior had a day of testing on Wednesday and plans to repeat his impressive performances from earlier in the year.

This is the report from his first Italian F4 visit to Imola: Jonny scored more points than anyone in the second Italian F4 round of the season by finishing 1st, 2nd and 3rd. He put on a fantastic show at Imola, fast from the opening laps of practice, and battling at the front against very strong opposition even when rain soaked the circuit for Race 2. Because of clashes with the ADAC series he has missed 2 of the 5 Italian F4 rounds but will now complete the season at Imola and Vallelunga.

Having already clinched the ADAC championship so impressively, Jonny said: “Testing didn’t go too well. I’m not too worried because last time we were here the pace was good. Every session had a couple of red flags or full course yellows so we did not have a lot of clear time. I got used to the track again and there are still two sessions before Qualifying so it should be OK. I think that Practice and Qualifying will probably be the same again with red flags so it will be hard to get clear laps. Especially a good lap after you warm up the tyres because that’s not easy, it’s quite cold. It will be difficult. Last time it was OK, it was hard to get a clear lap then, but any time I did it was P1 or close to it.”

Jonny knows that if the full 38 cars that tested also go out for Qualifying the track will be pretty full. “I think that there may be a few less than Wednesday, but still the most we have had this season I guess.”