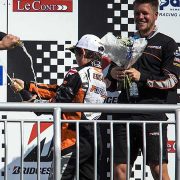 Jonny tightened his grip on the European Junior title with a fine performance in Finland. With one round still remaining, he leads his closest rival, Harry Thompson, by 24 points. Apart from the threat posed by Harry, there’s a mathematical possibility that Hadrien David of France could tie on points if Jonny returns from Sweden with a zero score. All other contenders, though, are out of the reckoning.

Jonny was satisfied with his performance during Saturday morning’s Timed Qualifying from which he emerged in 3rd place overall. However, both of the leading RFM team drivers, Jack Doohan and Harry Thompson looked especially quick as they took the top two places.

Heat 1 didn’t go quite according to plan after he was passed in the latter stages by Russian driver Ilya Morozov and Jose Maria Navalon Boya of Spain. Nevertheless, 3rd place was far from being a disaster and Jonny improved to 1st position next time out when he beat Zane Maloney from Barbados. He recorded another 3rd place in the following race, this time behind Gabriel Bortoleto (Brazil) and Australia’s Jack Doohan. There was an extremely tight finish in his 4th heat on Sunday morning when he lost out to Thompson by less than half a kart’s length.

Those results placed him on grid 3 for the main event. Doohan claimed pole position for this one, with Thompson sitting alongside him. Germany’s O’Neill Muth, who had been holding 2nd place to Jonny in the championships, only just squeezed into this race starting from grid 34.

Doohan led from the lights, with Jonny content to occupy 3rd place behind Thompson. After just 3 laps had been completed, however, he nipped past Harry and closed right up on Jack’s rear bumper. Morozov went through into 3rd position just after half distance. After 16 of the allotted 21 laps had been completed, Jonny moved through into 1st place and immediately pulled away. On the final lap, Morozov went past Doohan and Thompson followed him through into 3rd place.

“We always regarded Harry as the main title threat and that’s how it has worked out,” said Justin. “After dropped scores have been accounted for, Jonny’s lead is reduced from 24 to 22 points. It means that he’ll need 13 points in Sweden to be absolutely certain of the title. It doesn’t sound a lot, but there are all sorts of things that can go wrong in these meetings. The Forza team, Gordon Finlayson and TM engines have done a great job in putting him in this position. For their sake, and Jonny’s of course, we’re hoping that Sweden can produce the right result.”

Champion of Europe
Scroll to top