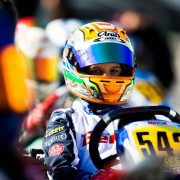 Jonny was in good form once again when he travelled to the Adria International Raceway near Rovigo in Northern Italy. This venue is famous for staging F3 and DTM meetings as well as top class karting events. On this occasion it was playing host to the prestigious WSK Cup, with no less than 57 competitors lining up in Jonny’s class.

Despite never having visited this circuit before, Jonny was recording fast times almost immediately. He finished in 10th place overall after Timed Qualifying and performed well in his Heats to line up 5th on the Pre-final grid. He tried hard to improve on this position throughout the race but finally had to settle for 5th place at the finish.

That still set him up for a good result in the main final, although by now it was clear that his motor didn’t quite have the cutting edge required for outright victory. His hopes were dashed right at the start of this race when he was involved in a collision that knocked him down to 29th position, well behind the main pack. He eventually improved to 25th, but it was a disappointing result after so much early effort.

“Although things haven’t gone quite his way over the last couple of weeks, Jonny has undoubtedly enjoyed the Italian events,” claimed Justin. “He has learned quite a lot from these two experiences and hopefully that should prepare him well for next season”.