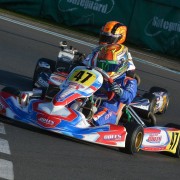 In his first competitive outing as a junior, Jonny produced a powerful performance to win the Grand Final of Mini-Max at PF on Sunday. It was his first race meeting on British soil since winning the Little Green Man Championships at this same venue last October. Clearly, the 3 months lay off had sharpened his appetite and he showed great pace throughout the entire weekend.

Sunday’s timed qualifying session was held on a dry circuit and Jonny looked to be heading for pole position on his final lap after turning the screens purple on the first two sectors. However, he ran into heavy traffic at the chicane that cost him a couple of tenths. Even so, his time on this lap was good enough to put him in 2nd place, just two hundredths of a second behind Dexter Patterson.

It began to rain as they came out for the Pre-Final, with everyone still on slick tyres. Dexter went off at Turn 1 and Jonny slipped down to 3rd spot, a position he held throughout this race, finishing behind Jenson Butterfield and Finlay Bunce. “He’d never tried a full size kart in wet conditions whilst using slick tyres and so he was rightly very cautious,” said Justin. “It was still a good result for us, but we believed that he’d go even quicker in the main event.”

Butterfield led the Grand Final for two laps, with Jonny tucked in close behind. He made his move on lap 3 and immediately pulled ten yards clear. After that he was cruising to victory, finally crossing the line 120 yards ahead of Butterfield. Lorcan Hanafin had held 3rd spot for much of the race but lost out on the final lap to Patterson.

Jonny was taking part in this meeting as a guest of Coles Racing. Until Friday, he’d never so much as sat in a Rotax powered kart. Most drivers coming out of cadets take a bit of time adjusting to the very different characteristics of these motors compared to an IAME. The way he adapted so quickly to this type of racing took many people by surprise and it bodes well for his S1 chances when these championships get underway in March.