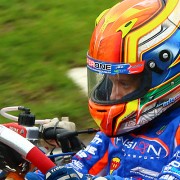 Jonny’s outstanding form continued down in Kent where he made it three wins from three attempts this year. Despite being billed as a club meeting, this one had attracted most of Britain’s top Mini-Max contenders, with Jenson Butterfield, Dexter Patterson, Tom Canning, Clayton Ravenscroft and Ben Burgess all present.

Jonny set a series of very quick laps in Timed Qualifying to go top of the list. That was rewarded by pole position in his Heat but he got involved in an incident that sent him spinning off the circuit. By the time he’d recovered, the leaders were almost 200 yards ahead but Jonny then set some very quick lap times that brought him up to 8th place.

The Pre-Final was won by Butterfield ahead of Patterson. Despite making up a lot of ground in the latter stages, Jonny finished this race in 3rd place. The Grand Final was held on over 15 laps on a drying circuit. Jonny completed Lap 1 in 4th spot, 50 yards behind the leader, Butterfield who had almost doubled his advantage by mid distance. From that point on, though, Jonny gradually reduced this gap and he hit the front on the final tour. Tom Canning finished 2nd with Jenson taking 3rd spot ahead of Clayton Ravenscroft.

“This has actually been the best start to a season that Jonny has ever made,” claimed Justin afterwards. “It’s taken us all by surprise because usually drivers need a bit of time to make the adjustment from cadets. I’m just hoping that his run of form continues into March when we have the “O” Plate meeting and S1 Round at Rowrah.